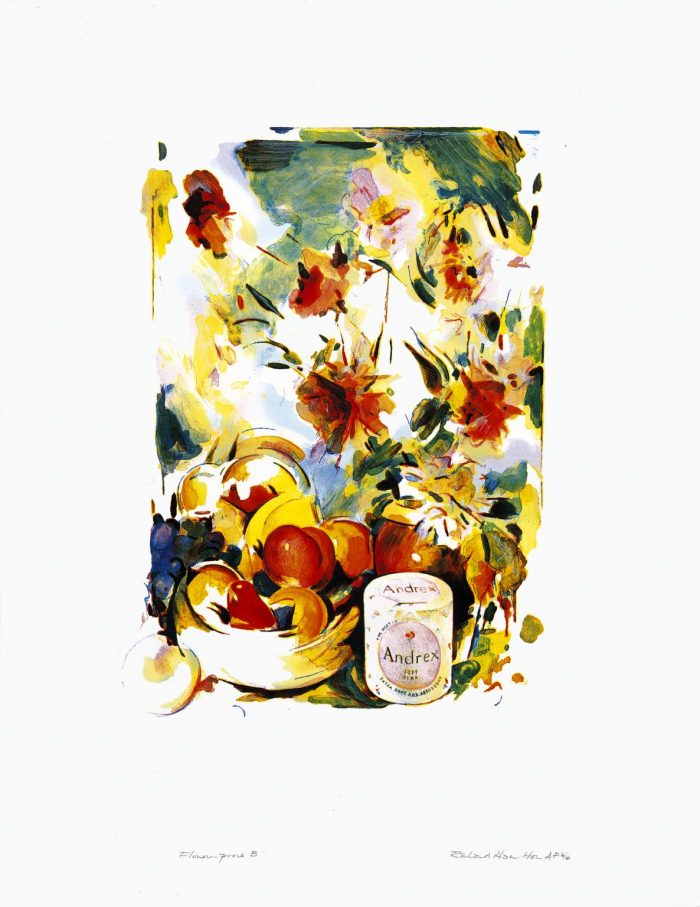 “Painter, teacher, exhibition organizer and artist employing a variety of means such as holographs, cibachrome and the Quantel paintbox computer. He was born in London where in 1936 he studied at Westminster Technical College and St Martin’s School of Art in the evenings. After a short period working in the Reimann Studios Hamilton studied at Royal Academy Schools in 1938, and in 1946, during the intervening period studying to be an engineering draughtsman, skills which he employed with the firm EMI. While he was at Slade School of Fine Art, 1948-51, Hamilton in 1950 had first solo show at Gimpel Fils Gallery. This was the start of an impressive exhibiting career which saw Hamilton’s work shown at such locations as Robert Fraser Gallery; Studio Marconi, Milan; Stedelijk Museum, Amsterdam and Vancouver Art Gallery. Hamilton was a prizewinner at John Moores Exhibition, Liverpool, in 1969, the year before his retrospective at Tate Gallery. He had a show at Serpentine Gallery in 1975, then it was 1991 before he had a major exhibition in London, this time at Anthony d’Offay. Hamilton taught at Central School of Art in 1952-3; was at King’s College, University of Durham, 1953-66; and in 1957-61 taught at Royal College of Art. Hamilton was a disciple of Marcel Duchamp; he reconstructed Duchamp’s Large Glass in the mid-1960s and shortly after organised the exhibition The Almost Complete Works of Marcel Duchamp at Tate Gallery. The Tate, which gave Hamilton a major retrospective in 1992, holds his work, as does Arts Council.” – ‘Dictionary of Artists in Britain since 1945′ by David Buckman.